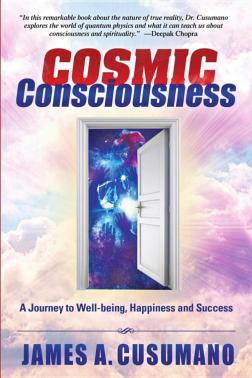 A Journey to Well-Being, Happiness and Success
By James A. Cusumano
Published by Waterside Productions
Buy from:

In this second edition of the original text published in 2011, Dr. Cusumano draws upon his extensive experience in business, entertainment, science, and technology, weaving all four intimately and effectively into the fundamental fabric of Eastern philosophical thought to demonstrate how to create a more meaningful and fulfilled life. His experience is that this kind of success is based on a deep sense of personal purpose and passion, which invariably leads to gratitude, the fundamental basis for all long-term happiness and fulfillment.

Dr. Cusumano shows how the perception of reality by our five senses is not true reality, but a physical illusion. He explains in simple terms, the direct link between Eastern philosophy and modern quantum physics and in doing so presents a proven technique for creating a desired reality. Cosmic Consciousness will be of interest and value to broad audiences ranging from business professionals, who want to become inspirational leaders, to people seeking a more passionate and fulfilled life.

Dr. Cusumano notes that "Unfortunately, since the Age of Enlightenment some 300 years ago, philosophy and science have been purposely disengaged as incompatible opponents. But there is a profound and complementary connection between these two fields, and used wisely this link provides the means to achieve higher levels of personal satisfaction, success, and fulfillment.

"Dr. Cusumano has been an entertainer, corporate executive, entrepreneur, and technologist. He started his career in the U.S. as a successful young recording artist during the 1950s and 60s as the lead singer for The Royal Teens of "Short Shorts" fame. After a Ph.D. in physical chemistry, he served as Director of R&D for Exxon. He subsequently co-founded Catalytica, Inc., one of Silicon Valley's highly successful companies, having business units in sustainable clean energy and pharmaceuticals. Dr. Cusumano served as President and CEO of Catalytica and then as its Chairman. Catalytica Pharmaceuticals, Inc. grew in less than five years, from four people to more than 2000 with nearly $500 million in revenues and $50 million in profit, increasing Catalytica's market value to $1 billion. He subsequently founded Chateau Wally Films (http: //www.ChateauWallyFilms.Biz) and produced the film, "What Matters Most," a winner in several international film festivals, and then released in more than 50 countries. He moved to Prague where he and his wife, Inez Cusumano bought and renovated Chateau Mcely to an award-winning luxury castle, spa hotel and forest retreat, chosen by the World Travel Awards as "The World's Leading Green Hotel."

Deepak Chopra's foreword to the first edition: "In this remarkable book about the nature of true reality, Dr. Cusumano explores the world of quantum physics and what it can teach us about consciousness and spirituality. His explanation of the way theoretical physicists understand the nature of the reality-consciousness connection will open up a new world for many. He explains how scientists and the ancients have reached many of the same conclusions about the nature of the universe despite their different paths to truth and their different ways of knowing. Dr. Cusumano's clear analysis and writing make this incredibly rich material available to others. Perhaps, by his example, others will be inspired to expand their consciousness, and from that expanded place, embrace the profound yet simple unity of all things. In truth, we are all one."
— Deepak Chopra, M.D.Chopra Wellness Center
Carlsbad, California, June 2010