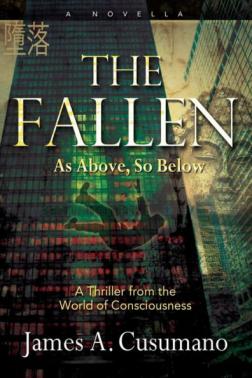 As Above, So Below A Thriller from the World of Consciousness
By James A. Cusumano
Published by Waterside Productions
Buy from:

Every now and then, we encounter an experience that defies our very notion of logic. It can be deeply disturbing; and on occasion, deadly. However, in the right context, such an experience can have an enlightening outcome. Such was the case for Michael Pierce, an intelligent, well-grounded and successful entrepreneur. For just a few seconds, he inadvertently stepped into an alternate dimension of space and time, into the “Twilight Zone”― and it changed his life forever.

James A. Cusumano is an accomplished leader and author with successful careers as an entertainer, scientist, corporate executive, and entrepreneur. After leaving his first profession as a recording artist, he went on to receive his PhD in physical chemistry. He then served as a research scientist for Exxon later becoming Director of R&D. Dr. Cusumano next co-founded Catalytica, Inc. one of Silicon Valley’s successful public companies. An inspiring speaker, he is the author of Cosmic Consciousness: A Journey to Well-being, Happiness and Success; Balance: The Business-Life Connection; Life Is Beautiful: 12 Universal Rules and is a coauthor of Freedom from Mid-East Oil. He lives in Prague with his wife Inez and daughter Julia where he is owner of, an award-winning luxury castle and spa hotel.