What Do You Really Want In A Job?

Having spent most of my professional life in California’s Silicon Valley, I was fortunate to meet a number of successful entrepreneurs, passionate leaders, who founded and built both small and large enterprises, each contributing to our global and social wellbeing. To name just a few, Steve Jobs and Steve Wozniak, founders of Apple Computer; Bob Swanson, co-founder of Genentech, and Jim Clark, co-founder of Netscape, and Silicon Graphics.

In discussions over the years with these gentlemen and others like them, I found that not one of them followed their course of action primarily to get rich. Not one of them sought to be famous, although each of them carried a sizeable ego, and the self-confidence to go with it. They each had a common set of principles that motivated them to achieve their successes.

They possessed three attributes that ignited and fanned the fires of passion within them to help address important world challenges, while creating millions of jobs, building hundreds of billions of dollars of corporate value, and contributing significantly to make this a better world. What is equally important, these same three attributes, I have found, are what motivate most of us in both our professional and personal lives. And you don’t have to be a budding entrepreneur, the same principles apply to your work as an employee.

These men pursued dreams that they thought would make a positive difference in the world. The first principle is to work on something that you believe is important and would benefit from your capabilities, something that would make an important positive difference. In the best of circumstances, it should be your personal passion in life. It doesn’t matter whether it’s for a small company or a large corporation. And it doesn’t matter if it’s for your own company, or one at which you work.

For example, if as a youth, you loved tinkering with your bicycle and as you grew older, with your car—and you were good at it—you might consider some aspect of engineering, mechanics, or construction. This might be in real estate development, civil or mechanical engineering, or perhaps having your own auto- repair shop. Of course, it’s fundamentally important that whatever endeavor you pursue, it takes advantage of your personal capabilities and strengths.

Steve Jobs, who was my neighbor for five years in Palo Alto, California, and dated my niece, is a good example. He didn’t invent the Apple computer; it was his friend, Steve “Woz” Wozniak. But, Jobs, having a keen marketing eye, recognized in 1976 that this device could change the way the world works.

He had barely made it through a few months at Reed College in Oregon before quitting. Yet he could see the global potential of the computer, and he wanted Woz to build the “neatest” computer on Earth, so that they could create—not capture—a market and help bring that potential to fruition. “An Apple in every home, business, and school,” he would say. It was his passion, and he was really good at it. He had few worldly possessions, just a beat-up old van. And he sold it to raise $1300 for Woz to buy the parts needed to complete the assembly of the first Apple computer. The rest is history.

Jobs was an entrepreneur in the true sense of the word. He was not your typical corporate executive. In fact, he probably would have been loathed to be called one. He once told me that his primary motivation in the innovation process is to make “cool” (read ‘irresistible’) products that usually end up creating a market, rather than chipping away at an existing market. Examples included Apple II, Macintosh, iPod, iTunes, and iPhone.

In fact, Steve had little patience with sales and market data for current products. He constantly sought to change the world for the better through innovation with “cool” products. With his driving vision and significant contributions from his talented technical team, Apple grew substantially and was the first 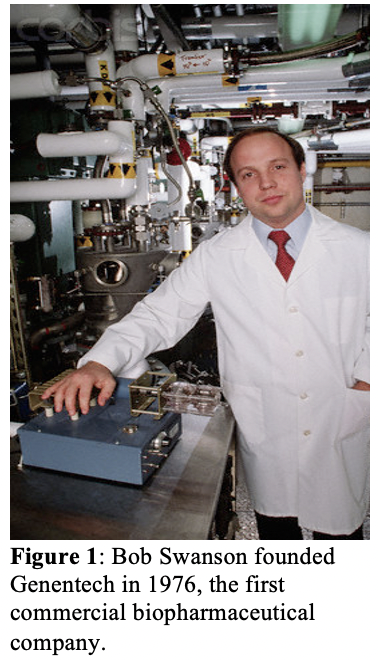 company in the world to reach a $1 trillion market value.

Another good friend, Bob Swanson, who founded Genentech, helped create a global revolution in genetic engineering that changed the face and future of healthcare. With biochemist, Herbert W. Boyer, Bob founded the company in 1976. They were the first successful commercial biotech company. He and his team developed biopharmaceuticals that literally have saved the lives of millions of people (Figure 1).

Our family personally benefited from his efforts. My father “died” twice in a Dallas hospital emergency room from a heart attack but was fortunate to be revived each time by strong electrical shocks in conjunction with a potent biotech drug called tissue plasminogen activator (tPA) developed by Genentech. Administered immediately after defibrillation, tPA activated a series of biochemical reactions in my father’s circulatory system that rapidly dissolved the heavy clots of protein plaque blocking the flow of blood in his life-preserving coronary artery. Bob’s leadership at Genentech created innovative drugs that saved Dad’s life and innumerable others throughout the world. It was ironic and saddened me deeply that Bob succumbed to a brain tumor at the age of fifty-two.

In 1981, Jim Clark left his secure tenured position as professor of electrical engineering at Stanford University to found Silicon Graphics. Subsequent to its success as a multibillion dollar computer company, Jim left to found Netscape because he saw that he could help launch the worldwide web, and he knew what that would mean for humanity. He was not after money or fame. Jobs, Swanson, and Clark all followed their dream with skills they had that could make a difference. Each of them sought to make the world a better place in which to live. And each of them found their life’s passion because they pursued their innate sense of purpose, something that would make the world a better place, something that built on their fundamental capabilities that differentiated them from others in their professional and personal circles.

In my smaller universe, I left Exxon where I was Director of Catalysis R&D with a promise of vice presidency. I gave up a comfortable and well-defined path to advancement and financial security to join two close friends in forming a fledgling consulting company called Catalytica, Inc. We each invested $10,000 to launch our adventure. I took out a loan to raise my contribution. The other two founders and I were trained and commercially experienced in catalytic science and technologies.

We knew that catalysis was critical to address many of the major global challenges that were beginning to be recognized in the early 1980s, not the least of which were then—and still are—sustainable, environmentally-compatible manufacturing; energy security; and climate change. In fact, it is now thought that the formation of inorganic catalysts somewhere in a warm ocean vent or a pool, is what led to the formation of the first lifeform on this planet—cyanobacteria—some 3.5 billion years ago. Without these catalysts, life as we know it would have been an impossibility. They speed up chemical processes by a factors of thousands and often, by millions.

Catalytic technologies enable manufacturers to reduce the number of process steps, as well as to minimize and often eliminate the use of toxic materials. We envisioned growing our consulting business to a critical nucleus and then moving into technology development and manufacturing, which we ultimately did.

We created Catalytica Pharmaceuticals, a major manufacturer of some of the most important drugs worldwide. When we eventually sold our company at a premium, which we had taken public on the NASDAQ Stock Exchange, we had 2,300 employees, annual sales of more than $500 million with a net profit of $50 million, and a market value of over $1 billion. We made our shareholders very happy! But I can honestly tell you that we were never after money. Our deep-seated passion was to help industry commercialize safer, more cost-effective, sustainable technologies—and we did just that. 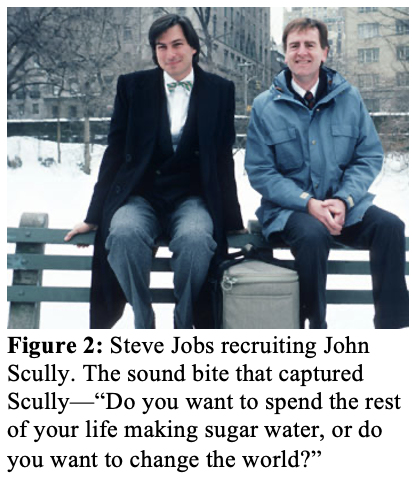 I Did It My Way

The second fundamental principle is that successful entrepreneurs need a strong sense of autonomy in their work; they have got to do it their way. They have a vision, and they want nothing to get in the way that vision. This is not to say that they don’t listen to the input of others to see how it might or might not fit with their thinking, but in the end, they follow their intuition and their dream. That attitude sometimes got Jobs in trouble with his colleagues at Apple, and in fact it got him fired by John Scully, the former CEO of PepsiCo, whom Steve had hired to help him build Apple (Figure 2). Ironically, the Apple board eventually fired Scully and brought back Jobs.

But the basic principle is sound, and applies not only to entrepreneurs, but to employees as well. If you are an employer and have smart people working for you, people who are passionate about their work, it is wise to give them a reasonable level of autonomy to carry out their job. I am not suggesting that you abdicate, but thoughtfully delegate. Effective delegation means setting boundaries and checking back on occasion as to employee progress and challenges. This approach often pays great dividends. Employees work harder, smarter, and almost always achieve their goals, often even more than was required.

The third fundamental principle is to envision, expect, and reap an appropriate reward for your efforts. No one works hard and succeeds and stays motivated without receiving a reward. For people like Jobs, Swanson, and Clark, it was important to see that their efforts made a positive difference in the world and for that to be recognized by their peers. Jobs loved press and product launch conferences, and he excelled at them. He was a master performer. And only lastly was money an important part of the reward. For Jobs, Swanson, Clark, and others like them, it’s not that money was unimportant to them, it was simply a measure of successfully achieving their vision. It wasn’t an end in itself. 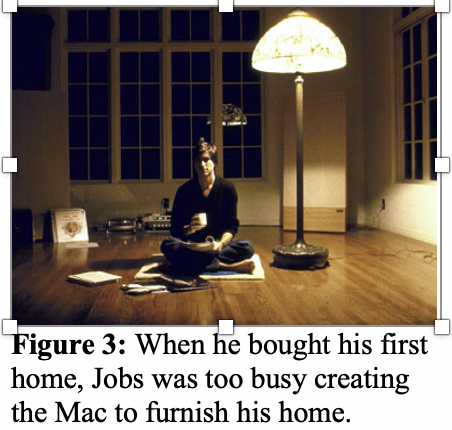 When Apple was about $1 billion in sales, some of the Apple financial executives advised Jobs,  who was single at the time, to invest in real estate, “Buy a home,” they said. As one can easily do in Silicon Valley, he spent several million dollars and bought a new home. But for the longest time, it was nearly empty. In addition to a bed, some lamps, and stereo equipment, it had almost no furniture (Figure 3). When I asked Steve why, he said he had no time to be bothered buying furniture. At the time, he was busy working on the Macintosh Project, the first computer to offer the point-and-click “mouse” technology interface that is now ubiquitous to all computers (Figure 4). 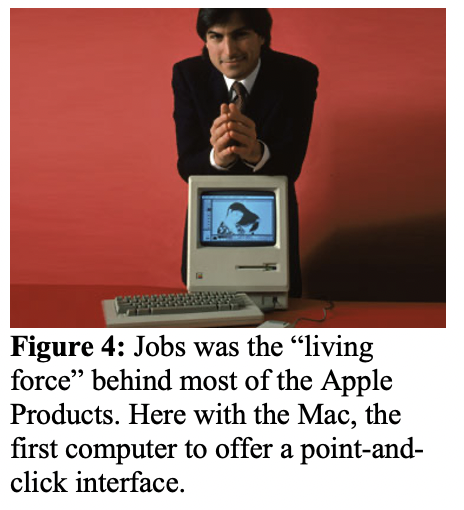 In 2005, Jobs gave the commencement address at Stanford University. His speech, which he wrote, can be found at http://news-service.stanford.edu/news/2005/june15/jobs-061505.html. I highly recommend it. It is inspirational. In a final passage, he offered excellent advice for professional and personal success.

Your time is limited, so don't waste it living someone else's life. Don't be trapped by dogma - which is living with the results of other people's thinking. Don't let the noise of others’ opinions drown out your own inner voice. And most important, have the courage to follow your heart and intuition. They somehow already know what you truly want to become. Everything else is secondary. . . Stay Hungry. Stay Foolish.

It’s been my experience that when you follow these three principles, although money is not the primary driving force, it comes as a consequence of your actions, and almost always is more than you could have anticipated.

Everything else is secondary.

I Can See Clearly: Rise Of A Supernatural Hero: Book One of The Luc Ponti Chronicles